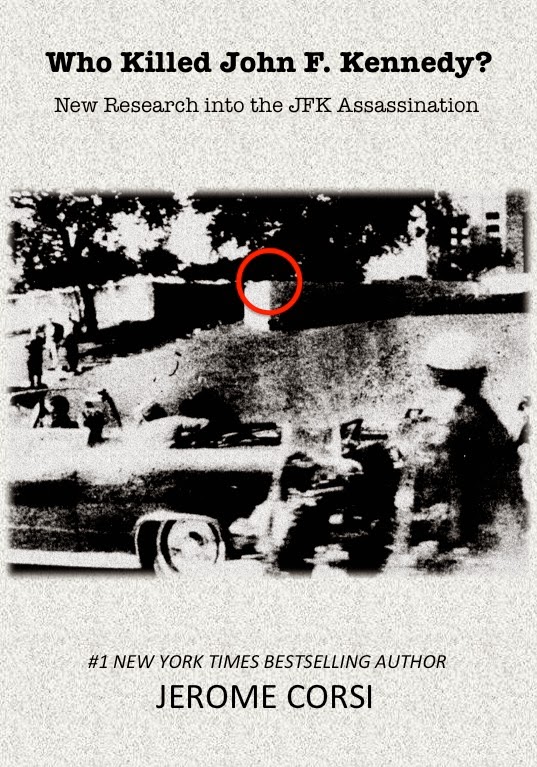 Although I’ve had Jerome Corsi’s e-book, “Who Killed Kennedy, New Research into the JFK Assassination,” for some time I’ve been busy and didn’t want to do a review without giving this book the attention it deserves.

I found the George H.W. Bush connection in this book interesting but not compelling, although it does add a certain flavor to the whole account about the CIA’s potential involvement in JFK’s assassination.

One thing that I find intriguing about the Bush segment is his inability to remember “exactly” where he was and what he was doing when it came over the news that JFK had been assassinated.  I was 16 years old and I was in history class. If a kid can remember that day so clearly a grown man involved in politics should surely remember.


What I find most compelling in this book is twofold.  First the ballistic science showing how it was impossible for all that damage to have been done by a single shooter, and the forensic science that supports it.   In years gone by I can remember seeing film that showed people ducking down in front of the grassy knoll as if there was a shot being fired.  I haven’t seen that in years.


This book gives more than reasonable assurance there were a number of shooters, possible as many as four – I will allow everyone to determine that for themselves, but it’s abundantly clear there was more than one.


The Kennedy’s were a strange lot, including old Joe Kennedy the father, JFK and his brother Bobby, and they ticked a whole lot of people off, including J.Edgar Hoover, the CIA, the Mob, and FDR has issues with Joe Kennedy when he was the ambassador to the Court of St. James, in England.
The CIA is a secret organization whose job it is to deal in dirt.  Spies are by definition, liars, murders, thieves and people who live amoral lives.  That’s what’s expected of them.  That’s what they’re hired to do.  So why should we find it surprising when evidence turns up they act in nefarious ways by calling such evidence of their activities “conspiracy” theories.  I often wonder if those who tout that line ever read a history book.  Or do they have other motives?


This book leaves a lot of loose ends because there are a lot of loose ends out there that need tied up.  And the government won’t tie them up.  If the government wants to end these “conspiracy” theories then all they have to do is release those 1000 pages of evidence they’re sheltering from the eyes of historians.  This isn’t a practice that is exclusive to communist or totalitarian states by the way.


The British sealed records about WWII for thirty years and fifty years.  When the thirty year restriction ended we discovered all that information about the Egnigma code breakers, and found out the British Generals weren’t all that smart in North Africa after all.  Rommel sent messages to Berlin to outline his plans regularly.  Plans that might have succeeded except those messages were intercepted and decoded and then sent to Montgomery.  Perhaps Montgomery wasn’t really the brightest pebble in the brook after all.


That brings me to the end of the fifty year restriction.  What did we learn?  Nothing!  That information has been deemed so important it is now classified indefinitely.  Why?  It’s my belief there are a great many families who are prominent in politics and business implicated in dirty dealings before and during the war on both sides of the pond, including the Duke of Windsor, FDR and all their cohorts, who now have prominent descendants in government and industry.  Remember this isn’t the Soviet Union, it’s the United Kingdom.


Unraveling the Kennedy’s assassination is a continuing and unpleasant saga that seems clear involves organized crime, rogue government agents and foreign governments.  Is it possible elected American officials were involved?    Who knows at this point!  This book is another chapter in book that’s a continuing saga unraveling it a page at a time and that book may not be finished in my lifetime.
Posted by Rich Kozlovich at 11:37 AM