Liberals Will Get Us All Killed


This appeared here.  My thanks to Alan for his permission to post his work.  RK
The news from Sydney, Australia was of another incident in which a lone Islamic fascist took civilians hostage to fulfill a demented notion of a “holy war” on non-believers. After a siege by police two of the hostages he had taken were dead along with the gunman.


These attacks are becoming more frequent, referred to as “lone wolf” events, but in a larger context, they represent an effort by al Qaeda and the Islamic State, ISIS, to recruit individuals to wage a war of terror everywhere.


Looking back over the year, in May Mehdi Nemmouche who had returned to France after fighting for ISIS, entered the Jewish museum in Brussels and killed four people. In October Martin Couture Rouleau ran down two Canadian soldiers in Quebec, killing one of them. The same month, Michael Zehaf-Bibeau killed a soldier at the Canadian parliament in Ottawa. Also in October, Zale Thompson attacked four New York police officers with an axe, injuring two in an incident that was deemed to be an Islamist attack.


In the wake of these attacks police everywhere are grappling with what they can do to anticipate and respond. In the attacks that have occurred, the perpetrators were all known to law enforcement authorities for their extremist views. In September, the Department of Homeland Security and the FBI put out a joint intelligence bulletin that the Islamic State has the capacity to mount attacks on U.S. targets overseas with little or no warning. Presumably the warning also included domestic attacks as well.


At a time when the threat is real and growing, there are forces in America that have deliberately sought to undermine public support and trust in the Central Intelligence Agency and National Security Agency, both on the front line of defense against the Islamist menace. The release of a report by Sen. Diane Feinstein (D-CA), Senate Intelligence Committee chair, was widely denounced for its evident failure to interview those named as engaging in “torture” to deter further attacks. This 20-20 hindsight and reinterpretation of events is an offense on many levels.
One has to ask why it is always liberals who are unable to acknowledge an actual threat and defame those charged with preventing them. It is as if they live in a parallel universe, a make-believe world where our enemies do not exist.


This is the mind-set that led the President to remove our troops from Iraq, creating a vacuum that ISIS filled. He is now lowering our role in Afghanistan and the news of the day is a barbaric attack by the Taliban in Pakistan that has killed 130, mostly school children. Can liberals grasp the barbarity of the Islamist enemies of our nation and the whole of humanity?


Most serious, though, are the negotiations with Iran, led by the Obama administration, that are sure to permit a leading sponsor of terrorism to acquire its own nuclear weapons. 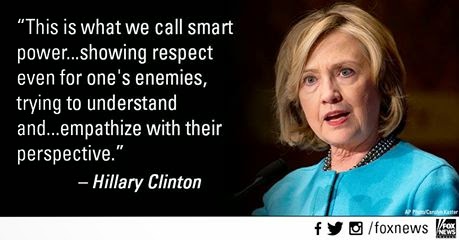 This is why many cringed when the anticipated Democratic Party candidate for President, Hillary Clinton, a former Secretary of State, recently touted an approach she calls “smart power,” urging America to use “every possible tool and partner” to advance peace. This, she said, includes “leaving no one on the sidelines, showing respect even for one’s enemies, trying to understand and insofar as psychologically possible, empathize with their perspective and point of view.”


This is the classic liberal excuse and attitude for not taking our enemies seriously when they say they want to destroy America. There isn’t a single justification for empathizing with people who want to kill you!


I frankly find the outcry against the nation’s police corps curious and outrageous. In the Ferguson incident, it was a case of self-defense that got Michael Brown killed. In Staten Island, it was the unanticipated death of Erik Garner who had resisted arrest and had a long record of similar offenses. The police did not set out to kill him, but a combination of his ill health and the takedown triggered his death.


The response of the communist Mayor of New York, Bill de Blasio, was not to defend his police force, but to join in the condemnation. Around the nation thousands marched, repeating the lies about Brown’s innocence and the claims about Garner’s death. The marches, held in a number of U.S. cities, were organized by groups with an agenda and it was aimed at undermining public support and trust in our police corps.


Remember, too, liberals are also opposed to the Second Amendment which empowers Americans to “keep and bear arms.” There is no way to misinterpret or not understand the limit this puts on government from the federal to the local level. Even so, the calls for such limits are constant.


Reportedly, “according to the Geneva-based Small Arms Survey – the leading source of international public information about firearms – the U.S. has the best-armed civilian population in the world, with an estimated 270 million total guns. That’s an average of 89 firearms for every 100 residents.” Liberals translate this as an invitation to mass murder in the streets and homes of America, but the reality is that gun ownership prevents criminal mayhem and protects lives. In states that permit concealed carry, the crime rate is less than in those that do not.


Liberals, though, would have you fear your local police force and those agencies that are tasked with protecting the nation, the CIA and the NSA. And, yes, the FBI too.


If not resisted, liberals would cause us all to be killed by our nation’s very real foreign enemies and the domestic perpetrators and criminals who prey on our society. Next time you see a police man or woman, take a moment to tell them how much you appreciate their service.