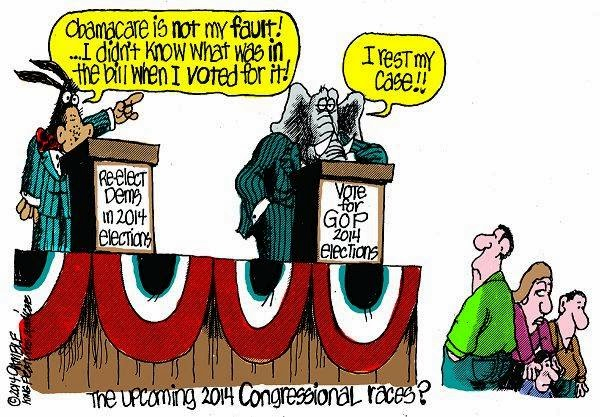 The total number of views for Warning Signs has passed 3.2 million and that's good news. Even better news is the way some thirty news and opinion websites and blogs share my daily commentaries. If you know one that you think would welcome posting my writings, let them know and encourage them to contact me. As 2014 unfolds and we all head toward the November midterms, there will be plenty to analyze and discuss.

As someone who started out his career as a newspaper reporter and editor, discovering that those in public relations pitching their stories were making much more, it didn’t take long for me to enter that profession. For me, the truth is always the best PR.
As the mainstream print and broadcast media’s editors and reporters filled up with those graduating from the schools and universities of the 1960s and since, it became more and more obvious that reporting anything fairly and honestly about the Republican Party and its candidates was a very low priority. Many arrived at their job with a negative image firmly intact……What worries me most as 2014 begins is what passes for the leadership of the Republican Party. Neither Boehner, nor McConnell, have any support. A Public Policy poll in November of Republicans gave only 15% to Boehner and 4% to McConnell.
Worse still, McConnell on an Oct 30 conference call organized by Karl Rove’s Crossroads organization for large donors said that the Tea Party movement, in his view, is “nothing but a bunch of bullies” that he plans to “punch in the nose.” Boehner has expressed similar animosity. In effect GOP elites have declared war on the Tea Party movement. There is no PR that can justify such stupidity and arrogance.

Stopping the construction of the Keystone XL pipeline from carrying Canadian oil, a major trading partner and ally of the United States, is just part of a much larger environmental agenda aimed at preventing access to this energy source, but it is larger in scope; stopping or slowing the development of America’s huge reserves of coal, oil, and natural gas.
Just before 2013 came to an end, the Sierra Club sent out an email claiming that “2014 is shaping up to be a defining year for the environment” warning that “Superstorms, wildfires, and mass destruction from climate change threaten us all. Future generations and endangered species like wolves and bear are counting on us.” This is pure fear-mongering. In 2013, all the factors mentioned were in decline.   On the first Earth Day in 1970, here are just some of the predictions that were made:

As far as Secretary of State John Kerry is concerned, the greatest threat to the Earth is “climate change.” That is his view as well of the Obama administration that, according to a CNS News article, wasted $7.45 billion taxpayer dollars over the last three years “to help developing countries cope with climate change in fiscal years 2010 through 2012, according to a federal government report submitted to the United Nations.” In Kerry’s words, climate change is “a truly life-and-death challenge.”
Since the first humans stood upright and began to walk, they have never played any role in climate change, a natural aspect of the Earth that is cyclical, moving between periods of warmth and cooling. We are currently in a 17-year-long cooling cycle which forced the army of environmental liars who claimed that “global warming” was the greatest threat to change its name to “climate change.” Another name change caused a lot of problems as well.


Obama's "Climate Change" Lies
The extreme cold that gripped the nation at the beginning of the year just added to the growing public dismissal of the claims that “greenhouse gas emissions” would lead to a dangerous stage of “global warming.” Indeed, even the charlatans that have devoted decades to this hoax are now using the phrase “climate change.”
We tend not to recall what the weather was like a year ago. In May 2013, Dennis T. Avery, a senior fellow for the Hudson Institute, noted that “Lots of us are commenting on the U.S. having the second coldest spring in the official thermometer record (starting ca. 1860) and the coldest since 1975. This cold spring highlights another climate cycle that has nothing to do with carbon dioxide (CO2).”


The United Nations Cesspool
I don’t write much about the United Nations because it is everything that it is not supposed to be. It’s supposed to be devoted to human rights and other noble and global aspirations. Instead it is a cesspool in which the worst of its member nations are sponsors of terror and other sins against mankind.
An article on Fox News reminded me of just how horrible, for the most part, the United Nations is despite its occasional usefulness. Anne Bayefsky writes extensively on the subject of human rights. She is a professor at York University, Toronto, Canada and an adjunct professor at Touro College in New York. She has been honored for her work and I rank her as one of the most impressive and important women on the international scene today. Her article took a look back at 2013 and what to expect in 2014.....
Posted by Rich Kozlovich at 5:13 PM