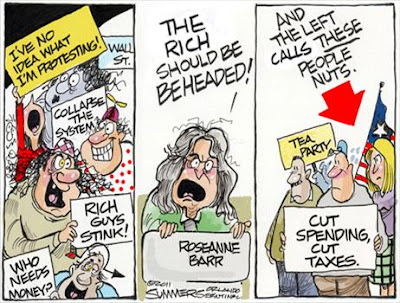 To see a list of their demands please go to,
"They don't know what they want, but they want it now!

Protesters trashing park with ties to powerful political, financial players - New York Mayor Michael Bloomberg's girlfriend serves on the board of directors for the private company that owns the park where Occupy Wall Street protesters have set up their home base, WND has learned. The protesters have reportedly been making a mess of Zuccotti Park, a public space that's owned by a private financial giant, Brookfield Office Properties, Inc. The park, close to Wall Street, is named after Brookfield's co-chairman, John Zuccotti. According to the Wall Street Journal, Brookfield wanted the protesters removed, but Bloomberg's New York Police Department urged the private company to allow the protests to stay in the park.

Suggests church members have 'potluck' at protests. A member of President Obama's controversial faith council has implied the Occupy Wall Street movement stands with Jesus, while asking church members to bring pizza and casseroles to the protesters.

How rhetoric about "income inequality" masks the protesters' true goal. - The Occupy Wall Street protesters are looking more and more like the shock troops of the Democratic Party’s electoral tactic of class warfare. Responding to a question about the protesters, the President gave an oblique endorsement when he said, “The American people understand that not everybody has been following the rules; that Wall Street is an example of that.” …… Certainly organized labor also thinks they can use the protesters, which is why some labor groups––particularly public employee unions hooked up to diminishing taxpayer-funded life support––are marching alongside them, in the hopes that they can exploit this movement to protect their Cadillac benefits.....[As for the rich paying their fair share] In 1981, the top 1% paid 17.58% of all federal income taxes; in 2005, this same cohort paid 39.38%. In 1981 the top 1% paid $94.84 billion (in 2005 dollars); in 2005 they paid $368.13, an increase of 288%. In the most progressive tax system among OECD economies, today the top 10% of American taxpayers pay 70% of all revenues, while the bottom 47% pay nothing. In other words, this increasing “income inequality” has led to the rich footing most of the tax bill for all the goodies the federal government dispenses. Contrary to the current class-warfare rhetoric, “If you want to get more tax revenues from the rich,” economist Arthur Laffer points out, “you’ve got to make the rich richer, and to make the rich richer, you’ve got to lower tax rates.” If the “anarchists for Big Government,” as Mark Steyn calls them, really want more federal money for their demands like “free college education,” “a $20 minimum wage,” and a trillion dollars for “ecological restoration,” they should be endorsing supply-side economics.

Radical's plan involves strategy to collapse stock market - Stephen Lerner, a controversial anti-capitalist SEIU organizer, is one of the forces behind the protests on Wall Street and nationwide, according to quotes obtained by a socialist activist who doubles as a Washington Post columnist. WND was first to report Lerner was the brain behind some of the economic protest templates being used by the Occupy Wall Street campaign. Lerner recently laid out a mass economic protest plan intended to bring down the stock market, and boasted his plan could be used to cause a new financial crisis. His ideology prompted some conservative critics to go so far as to label him an economic terrorist.

Occupation of Wall Street—What Would Che Guevara Do?

Guevara would clear the occupation of Wall Street in a New York nanosecond. His colleagues of the time recall Che cheering the Soviet tanks slaughtering Hungarian freedom-fighters in the streets of Budapest. The youths they machine-gunned and blasted were all “fascists and CIA agents!” he raved……In a TV speech on June 26, 1961, when Che Guevara was Cuba’s “Minister of Industries,” he proclaimed: “Cuban workers must get used to live in a collectivist regimen, and by no means can they go on strike!” …………Che Guevara also denounced those who “choose their own path” (as in growing long hair and listening to “Yankee-Imperialist” rock & roll). These were vilified as worthless “roqueros,” “lumpen,” and “delinquents.” In his famous speech, Che Guevara even vowed “to make individualism disappear from Cuba! It is criminal to think of individuals!”