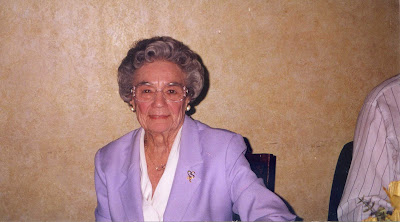 In 1937 there were eight pest control companies listed in the Akron area yellow pages. Three of those original eight are still listed — Terminix, Master Exterminating and T-N-T Exterminating. The years have changed the pest control landscape, but there was the one constant among Summit County pest controllers; Bettie Portwood, who was also the first and only lady President of the Ohio Pest Management Association!

In 1962 Bettie and Norman Portwood, who were the owners of T-N-T Exterminating at the time, met with Akron City Health officials with the goal of forming a local professional pest control association. The Summit County Pest Control Association was born with 18 members, including Dick Schroeder of Southern Mill Creek Products. Those eighteen companies represented over three quarters of the 23 companies listed in the Yellow Pages at this time. Along with their regular meetings they would meet once a year with the Cleveland Pest Control Association with as many as one hundred people attending.

Bettie served as the Summit County Pest Control Association’s first Secretary/Treasurer. Actually, the only Secretary/Treasurer the SCPCA ever had until Denise Anderson of A-Best Pest Control became Bettie’s assistant. She served the Summit County Pest Control Association faithfully in this capacity for 44 years. She announced on February 15, 2007 that this would be the last two-year term she would serve ending with the new elections.  This truly was the end of an era.

Much to the sadness of those who knew her, Bettie passed away on Friday, October 21st. at the age of 93. Her grandson Colm called Denise Anderson, the current Secretary/Treasurer of SCPCA, to let everyone know that Bettie died in peace and has been cremated. Private family services will be held at a future date. Bettie was survived by daughter, Jean Davis Almquist and grandsons, Liam and Colm Davis, all of Evanston, Ill., two nieces, and one nephew.

Since her husband and her mother passed in 1989 Bettie didn't have any family living in the area.  However, she did have a large and deeply affectionate pest control family who called on her regularly as she went into a nursing home this year.

Her impact on people in the pest control industry can’t be overstated. Over the years people would ask me why I attended the Summit Country meeting since I did so little work in Summit County and lived so far from Akron, where our association meetings are held. I always said the same thing. I just couldn’t say no to Bettie. Because of her unending warmth and sense humor Bettie was easy to love and impossible to forget.

There was a reason that Bettie was called the First Lady of Pest Control. She deserved it!

Email ThisBlogThis!Share to TwitterShare to FacebookShare to Pinterest
Labels: Betty Portwood, My Commentary