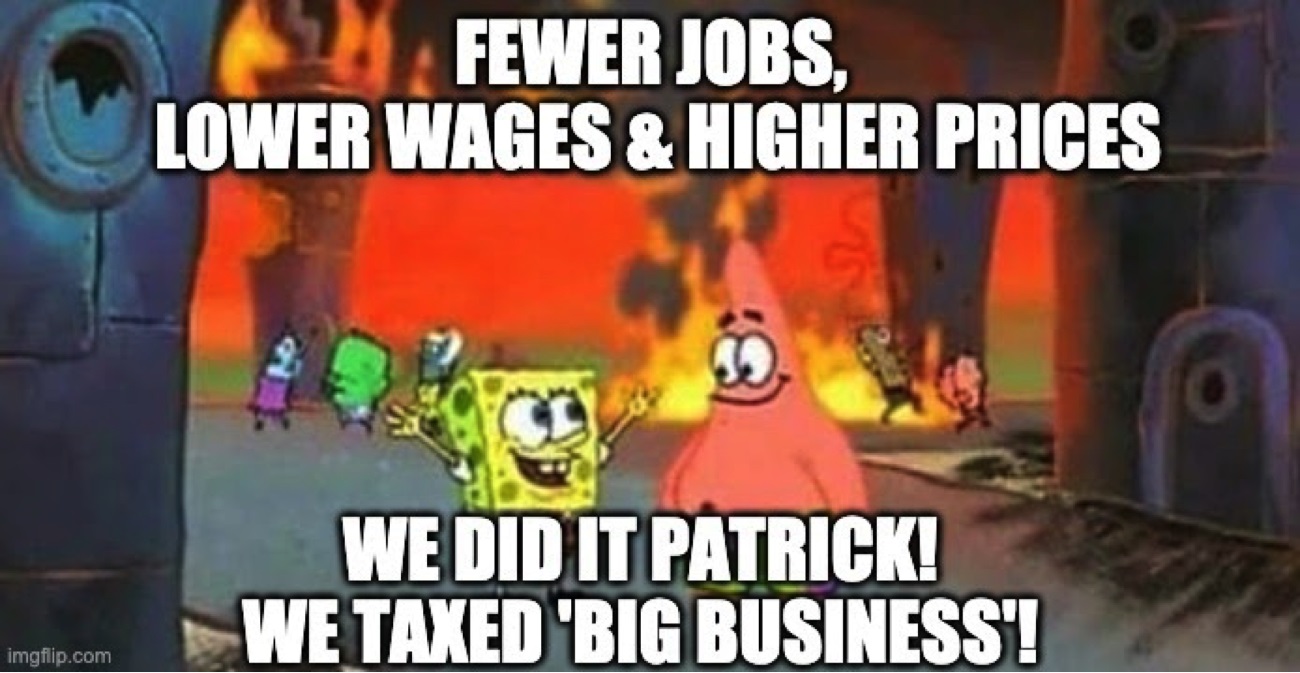 I’m especially concerned about his approach to business taxation.

Regarding the third point, I wrote a column on that topic for the Orange County Register.

Here’s how I described Biden’s proposal.

Biden has proposed several tax increases that specifically target American firms that compete in world markets. Most notably, the Administration has proposed to double the tax rate on “global intangible low-tax income” (GILTI) from 10.5 percent to 21 percent. Translated from tax jargon to English, this is largely a tax on the income American firms earn overseas from intellectual property, most notably patents and royalties. Keep in mind, by the way, that this income already is subject to tax in the nations where it is earned. Most other nations do not handicap their companies with similar policies, so this means that American firms will face a big competitive disadvantage – especially when fighting for business in low-tax jurisdictions such as Hong Kong, Ireland, Singapore, Switzerland, and most of Eastern Europe.

And here are some additional reasons why it is very bad news.

…let’s simply look at the bottom-line impact of what Biden is proposing. The Tax Foundation estimates that, “The proposal would impose a 9.4 percent average surtax on the foreign activities of U.S. multinationals above and beyond the taxes levied by foreign governments” and “put U.S. multinationals at a competitive disadvantage relative to foreign corporations.” …a stagging $1.2 trillion tax increase on these companies. …This is not just bad for the competitiveness of American-based companies, it is also bad policy. Good fiscal systems, such as the flat tax, are based on “territorial taxation,” which is the common-sense notion that countries only tax economic activity inside their borders. …Many other nations follow this approach, which is why they will reap big benefits if Biden’s plan to hamstring American companies is approved. The key thing to understand is that the folks in Washington have the power to raise taxes on American companies competing abroad, but they don’t have the ability to raise taxes on the foreign companies in those overseas markets.

The Wall Street Journal‘s editorial page has been sounding the alarm on this issue as well.

Here are some excerpts from an editorial back in April.

…the tax on global intangible low-tax income, known as Gilti, which was created by the 2017 tax reform. …Gilti was flawed from the start…but Mr. Biden would make it worse in every respect. …The 2017 tax law set the statutory Gilti rate at…10.5%. Mr. Biden would increase that to 21%… the effective rate companies actually pay is higher. This is because Gilti embedded double taxation in the tax code. …Gilti allows a credit of only 80% of foreign taxes, with no carry-forwards or carry-backs. …Raising the statutory rate to 21% increases that effective rate to 26.25%. This new Biden effective minimum tax would be higher than the statutory tax rates in most countries even in Western Europe… The Biden plan would further increase the effective Gilti rate by expanding the tax base on which it’s paid. …A third Biden whammy would require companies to calculate tax bills on a country-by-country basis. …Requiring companies to calculate taxable profits and tax credits individually for every country in which a company operates will create a mountain of compliance costs for business and work for the Internal Revenue Service. …The Biden Administration and its progressive political masters have decided they don’t care about the global competitiveness of American companies.

Let’s close with some international comparisons.

According to the most-recent International Tax Competitiveness Index, the United States ranks #21 out of 35 nations, which is a mediocre score.

But the United States had been scoring near the bottom, year after year, before the Trump tax reform bumped America up to #21. So there was some progress.

If the Biden plan is approved, however, it is a near-certainly that the U.S. will be once again mired at the bottom. And this bad policy will lead to unfortunate results for American workers and American competitiveness.

Posted by Rich Kozlovich at 6:55 AM