Economic Policy Matters: The Example of Botswana vs. South Africa vs. Zimbabwe

What’s the best argument against statism?

As a libertarian, my answer is that freedom is preferable to coercion. Freedom also ranks higher than prosperity. For instance, the government might be able to boost economic output by requiring people to work seven days a week, but such a policy would be odious and indefensible.

As an economist, I have a more utilitarian perspective. The best argument against statism is that it simply doesn’t work. Nations with bigger government and more intervention routinely under-perform compared to otherwise-similar countries with small government and free markets.

That’s why I often present my leftist friends with my two-question challenge. I ask them to name a country, anywhere on the planet and at any point in history, that either become rich with statist policies or has experienced superior levels of growth with statist policies.
They never have an answer. Or, to be more specific, they never have an accurate answer since Sweden (their reflex response) became rich when government was small and has stumbled ever since a large welfare state was imposed.

And if they are willing to have an extended discussion, my next step is to compare the long-run performance of market-friendly jurisdictions with statist jurisdictions. Whether we’re looking at Chile vs. Venezuela, North Korea vs. South Korea, or Hong Kong vs. Argentina, the results always show that economic liberty is the recipe for growth and prosperity.

When I ask them to show a statist nation with decades of good results, they don’t have an answer. Or, to be more specific, they never have an accurate answer since China (their reflex response) only started to grow once the economy was partially liberalized. 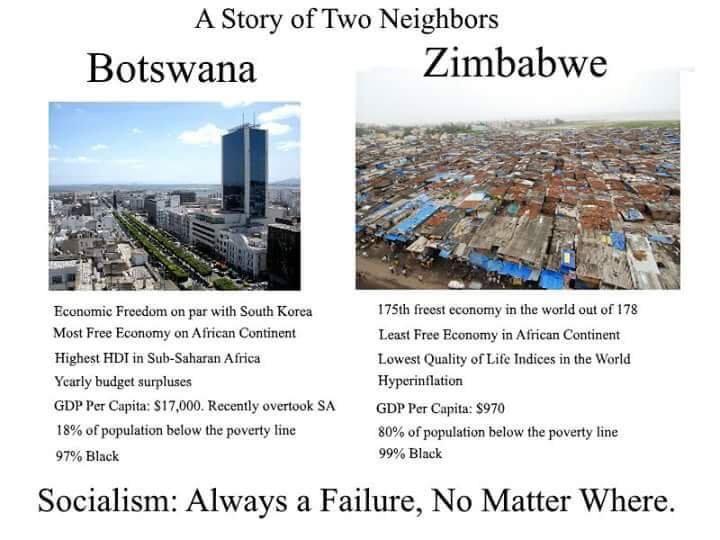 I’m pontificating on this topic because a reader sent me this very stark contrast between market-friendly Botswana and the statist hellhole of Zimbabwe. I can’t vouch for the specific numbers, though it appears some of them are from the Heritage Foundation’s Index of Economic Freedom.
The obvious lesson is that good policy is producing vastly superior results in Botswana.

But I wanted independent confirmation since not everything one sees on the Internet is true (shocking!).
So I checked Human Progress, the invaluable data portal created by Marian Tupy, and downloaded more than 50 years of data for inflation-adjusted ($2010) per-capita GDP in Botswana, Zimbabwe, and South Africa.

The results, to put it mildly, are stunning. Botswana has enjoyed much faster growth than South Africa and Zimbabwe has suffered horrible stagnation.


How different, I thought, was Zimbabwe from Botswana, the latter of which is safe and increasingly prosperous. But what accounts for such striking differences between the two neighbors? It turns out that much of the difference stems from the degree of freedom that each populace enjoys.

Here’s some of what he wrote about Botswana.


As Robert Guest of The Economist noted in his 2004 book, The Shackled Continent, “In the last 35 years, Botswana’s economy has grown faster than any other in the world…” According to Scott Beaulier, an economist at Beloit College, “Khama adopted pro-market policies on a wide front. His new government promised low and stable taxes to mining companies, liberalized trade, increased personal freedoms, and kept marginal income tax rates low to deter tax evasion and corruption.” …Economic openness served Botswana well. Between 1966 and 2006, its average annual compound growth rate of GDP per capita was 7.22 percent — higher than China’s 6.99 percent. Its GDP per capita (adjusted for inflation and purchasing power parity) rose from $671 in 1966 to $10,813 in 2005.

And here are some of his observations about Zimbabwe.


…almost all of the country’s 4,000 white-owned farms were invaded by state-organized gangs. Some of the farmers who resisted the land seizures were murdered, while others fled abroad. …The agricultural sector soon collapsed, and with it most of Zimbabwe’s tax revenue and foreign currency reserves. …the government ordered the Reserve Bank of Zimbabwe (RBZ) to print more money, sparking the first hyperinflation of the 21st century. …Mugabe’s answer to the falling economy was to increase state patronage and the intensity of the looting.

Needless to say, nothing has changed in the decade since that article was published. Though hopefully Mugabe’s recent ouster may lead to better policy in Zimbabwe (it would be difficult to move in the wrong direction, though Venezuela is evidence that further deterioration is possible).
Let’s conclude with a video I shared three years ago, but it’s worth a second look since we’re considering Botswana’s comparative success.

By the way, none of this suggests Botswana is perfect. Indeed, it’s not even close.

According to the Fraser Institute’s Economic Freedom of the World, it is ranked #50, which means it isn’t even in the top quartile. And its latest score of 7.37 (out of 10) is well below top-ranked Hong Kong’s score of 8.97.

But you don’t have to be fast to win a race. You simply need to be quicker than your competitors. And, on the continent of Africa, Botswana has the most economic freedom.

P.S. I fully expect South Africa to move in the wrong direction, at least in relative terms if not absolute terms.

Posted by Rich Kozlovich at 1:52 AM