"DDT resistance takes the form of excitation and avoidance, making it ideal for keeping mosquitoes from human prey even after resistance develops. Does this suggest anything?" - Steve Milloy

The war to bring malaria to heel has made slow but steady progress during the past decade, with the overall mortality rate dropping by more than 25% since 2000. A key factor in this progress has been improved control of mosquitoes, which transmit the Plasmodium parasite — a potent killer that claimed an estimated 655,000 lives in 2010 alone. But health officials fear that the spread of insecticide-resistant mosquitoes could bring about a resurgence of the disease. To help combat this threat, on 15 May the World Health Organization (WHO), based in Geneva, Switzerland, issued a strategic plan to curb the spread of resistance..... 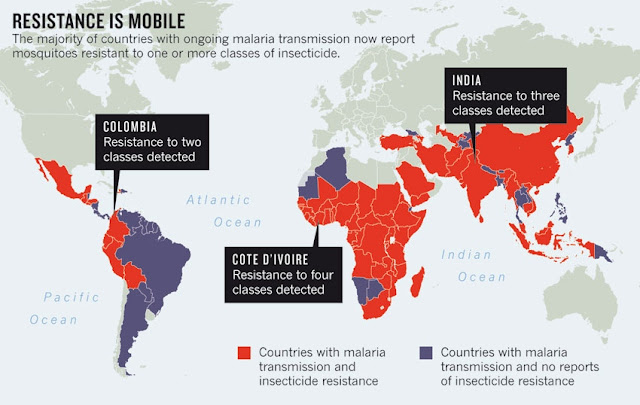 The WHO report says that insecticide-resistant mosquitoes already inhabit 64 malaria-ridden countries. The problem is particularly acute in sub-Saharan African countries such as Benin, Burkina Faso, Cameroon, Côte d’Ivoire, Ghana, Ethiopia and Uganda, where mosquitoes are frequently resistant to compounds known as pyrethroids and even to the organochloride DDT, venerable tools of mosquito control. Because they are extremely safe for children, effective against mosquitoes and affordable, pyrethroids are the only insecticides used to treat bed nets, as well as the first choice for household spraying.....

When a country is in dire need of food, clothing, shelter and other necessities for life, it cannot possibly be concerned with environmental issues.…. Unfortunately, some so-called environmentalists wish to keep Africa and other developing nations in perpetual underdevelopment. They pay them off to be “environmentally conscious,” by giving them handouts – food and monetary aid – to keep them alive and perhaps have little solar panels on their huts. But they also ensure that those poor families never prosper or become middle class – so as to perpetuate environmentalist notions of “noble natives,” supposedly “at one” with their environment and living a “sustainable” existence….much of that money is lost to corruption, while the people are forced to continue living in a state of poverty, disease, malnutrition and deprivation, as technologies that could enhance their length and quality of life are denied to them. Among the technologies denied are modern seeds, fertilizers, and high-tech, high-yield farming methods to increase food supplies; natural gas and electricity to heat homes and cook food, instead of cutting down forests and burning wood, thereby degrading indoor air quality and causing lethal lung infections; refrigeration so that people do not have to choose between eating spoiled food and going hungry; and the use of insecticides, including the powerful insect repellant DDT, to spare them from the agonizing illness and death brought on by malaria…… I fail to understand how anyone thinking rationally can argue that poverty and economic hardship will enhance environmental stewardship, or that the planet is more important than the people who live on it.