This article is truly appropriate.  Those pushing “Anthropomorphic Climate Change” have made the term "Scientific Integrity" an oxymoron.  Just about everything they say is either a lie of commission or lie of omission.  RK 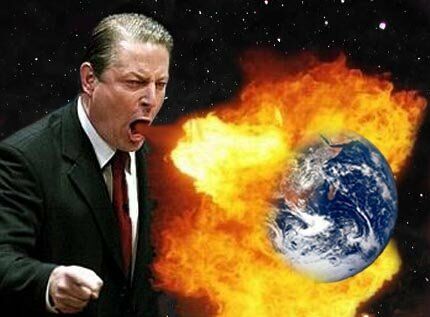 Thursday, June 30, will mark the beginning of the Sixth International Conference on Climate Change, sponsored by The Heartland Institute, a free market policy center headquartered in Chicago. The conference will be held in Washington, D.C., an appropriate location considering how much hot air emanates from Congress and the White House.

I attended the first conferences that took place in New York City, just across the river from where I live, so I was “there at the beginning” for conferences that were, in the words of Gandhi, largely ignored by the mainstream media and subsequently mentioned but only as the object of mockery.

When, in 2009, emails exchanged between a handful of scientists who provided the United Nations Intergovernmental Panel on Climate Change with the most specious, deliberately duplicitous “data” to prop up the “global warming" hoax were revealed, the whole house of cards began to collapse.

It has since been propped up by a bunch of media, political, and science dead-enders who had stacked their reputations on pulling off the great hoax of the modern era; that an infinitesimal amount of carbon dioxide in the atmosphere—0.038 percent—was causing the Earth to heat up, the seas to rise, and Minnie Mouse to announce she was pregnant.

The success of the forthcoming conference, however, has been blessed by the modern form of respect, a preemptory news release attacking it. The Center for American Progress issued a “press call advisory” titled “Climate Deniers Congregate in the Nation’s Capital.”

It began, “The Heartland Institute, a conservative group funded by Exxon Mobil and Charles Koch…” Whoa! Mr. Chairman, we rise to question why the Center for American Progress would engage in an outright lie? Answer: That’s what progressives do because they are immune to the truth.

But let’s finish the Center’s opening sentence that characterized the conference as “boasting a full agenda of notable climate deniers.” The term climate deniers has long been attached to any scientist, academic, politician, or commentator such as myself who had the temerity to point out that every single claim made on behalf of “global warming” was pure horse-hockey.

Since 1998 we have been discussing the new climate cycle, a COOLING one!

The Center for American Progress sought to make light of the conferences’ theme, “Restoring the Scientific Method.” And a damn fine theme it is considering the damage to the entire scientific community that, prior to the global warming hoax, was not famous for deciding what the truth was by “consensus.”

Real science still depends on peer review and the thorough testing of a hypothesis until it can no longer be disputed because it is reproducible. You can say the Earth is flat until you are blue in the face, but it is still round. The “warmists”, however, did everything they could to short-circuit this rigorous process.

Would someone please tell the Center that the Earth is now more than a decade into a perfectly natural cooling cycle and that mankind does not control the sun, the oceans, the clouds, the volcanoes, or any climate event? Whenever a tsunami, blizzard, or tornado occurs, Mother Nature’s advice to mankind is “Get out of the way!”

Since I am loath to travel further these days than the Bagel Chateau one town over from where I reside, I shall be watching the conference on streaming video, June 30 to July 1. It should be noted that, in addition to a roster of some of the world’s most respected climate scientists who will make presentations, the Institute has routinely invited some of the most prominent alarmists—warmists—to participate.

A recent Forbes article noted that “a virtual Who’s Who of global warming media hounds” had been invited to participate in the conferences over the years. Conference coordinator, James Taylor, the Institute’s senior fellow for environment policy, said that Al Gore, James Hansen, Michael Mann and others “all seem to have some sort of scheduling conflict whenever they have to share the stage with a scientist who will be challenging their evidence.”

Meanwhile, the egregiously misnamed Center for American Progress will hold a conference call on Wednesday to launch an attack on the conference. No longer ignored or mocked, the Heartland Institute and its conference are clearly on the winning side.

Funeral ceremonies for “global warming” will follow with the mourners all wearing green.