Workers suffer when militarized police and Big Green get together 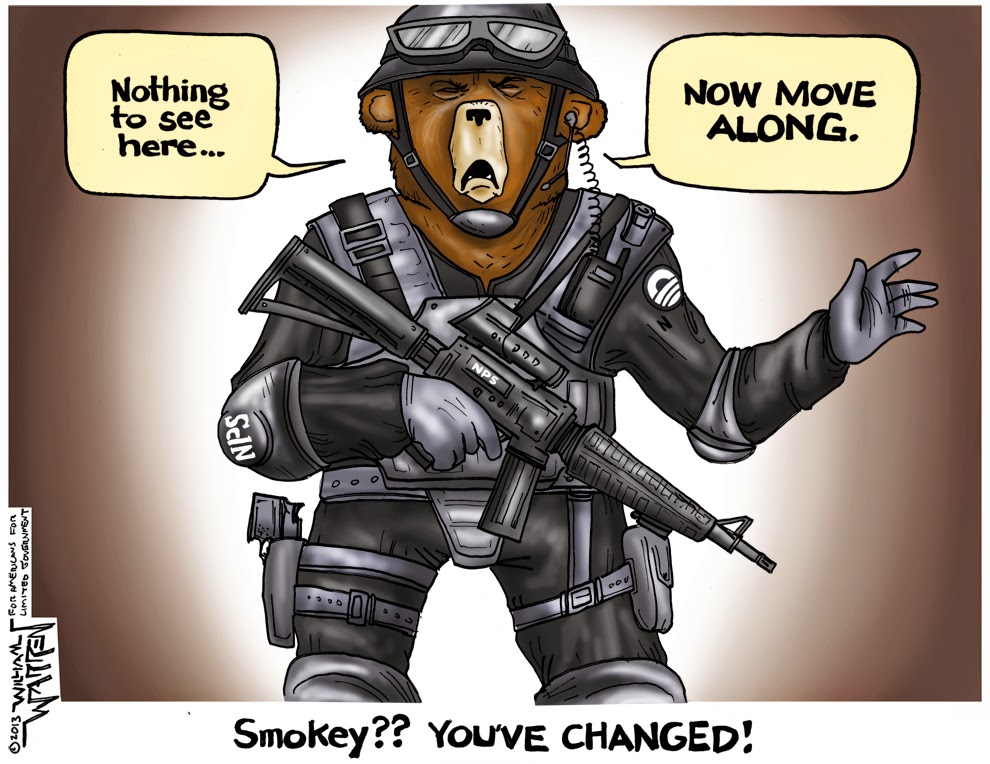 While all eyes turn to the gunfire and Molotov cocktails of War Zone Ferguson, Mo., many minds turn to questions of mindless faith in the political establishment.


What’s happening to us?


One such mind belongs to basketball champion turned actor and best-selling author, Kareem Abdul-Jabbar, whose Monday commentary on Ferguson for Time Magazine bore the chilling headline, “The Coming Race War Won’t Be About Race.”


It will be about class warfare, he predicted — the powerful and wealthy elite against the 50 million Americans who are poor — black, Latino, and white. “Fifty million voters is a powerful block if they ever organized in an effort to pursue their common economic goals,” Abdul-Jabbar wrote.


This great icon’s class warfare insight reaches farther than he knows, into the multi-millions of marginalized, demonized, and despised workers of the resource class — loggers, coal miners, cattle ranchers, commercial fishermen, oil rig roustabouts, tunnel blasters, heavy equipment operators, and on and on — every one of us who gets dirty hands making the stuff of elite splendor and majesty. And, yes, I once shoveled foundation trenches and shouldered kegs of ten-penny brights (nails) for a living.


All these hardworking people are mocked, devalued, and destroyed by Big Green’s privileged few, as told in the recent Senate report, “How a Club of Billionaires and Their Foundations Control the Environmental Movement and Obama’s EPA.” It’s a class warfare warning.


The Gordon and Betty Moore Foundation’s chief investment officer, Denise Strack, doesn’t help the poor with their economic goals using her $1.6 million annual compensation or the foundation’s $5.6 billion assets from the Intel fortune, but helps ruin every resource worker possible.


Big Green conducts class war with its power over the federal government.


If that sounds impossible, let me tell you a story.


On July 27, 1991, thirty U.S. Forest Service agents on horseback, some armed with semi-automatic weapons and wearing bulletproof vests, raided rancher Wayne Hage’s cattle in Meadow Canyon in the Toiyabe National Forest, high in the mountains of central Nevada. The cows were drinking from disputed water and were to be impounded that day, destroying Hage’s livelihood — and dooming some of the meat supply that gave minimum-wage urban burger flippers something to flip.


The agents hoped to infuriate Hage into violence and kill him. However, he showed up with a camera, immortalized them on film, sued them, and after years in a federal court, won a ruling that he owned the water. The Forest Service had no right to impound his cattle.


On April 2, 1990, Deputy Chief of the U.S. Forest Service James C. Overbay sent a letter to his subordinate regional foresters, urging support of environmentalists in return for their help supporting larger Forest Service fish and wildlife budgets, removal of ranchers, and expansion of USFS authority and power. It said:


Conservation groups representing the organized wildlife and fish interests across the country have given considerable effort, time, and money to help the Forest Service promote these important programs. We need the support of these groups to avoid possible reductions in fish and wildlife budgets. They would like to see the results of these efforts. We owe this to them.


A little over a year later, the Forest Service paid off rich environmentalists by ruining Wayne Hage. The service’s culture of resource stewardship was drifting far from its conservation roots to political obsequiousness and ostentatious zeal.


Overbay had already devastated other ranchers with less publicity, but it was the Hage raid that reinforced Cliven Bundy’s misguided beliefs about federal authority and led to President Obama’s Bureau of Land Management storming the Bundy ranch from attack helicopters duded up in military-grade body armor, flashing short-barreled assault rifles, and crashing around in armored vehicles – enough combat equipment to remove the tinfoil hat stigma from the black helicopter crowd’s collective head.


As John Steinbeck famously wrote in The Grapes of Wrath: “Repression works only to strengthen and knit the oppressed.” A rabble in arms materialized from all over the West to protect the Bundy ranch – ready to die. It was blatant armed insurrection, but federal prudence prevailed and the BLM stood down – prosecutors are dealing with it now.


The militarization of federal agencies has a long history but should have a short future. Big Green’s federal power grip needs to be smashed and its storm troopers disarmed.


Maybe it’s unrealistic, but perhaps Abdul-Jabbar could recommend a diplomatic mission from the poor to the reviled workers of the resource class, put aside any past hurts and hates for a while, and organize in an effort to pursue their common economic goals.


Ron Arnold is a free enterprise activist, author, and newspaper columnist. He pioneered methods to expose the money and power of Big Green in nine books and hundreds of magazine and newspaper articles. He mentors promising activists and writers as a civic duty.
Posted by Rich Kozlovich at 7:55 AM