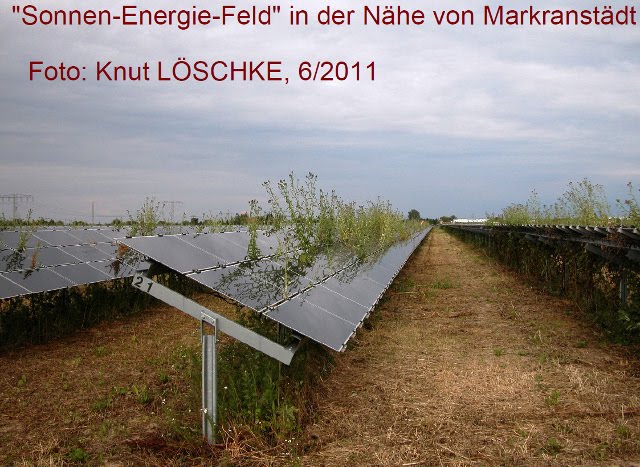 
‘The park is finally realized,’ beams mayor Carina Radon (CDU) nowadays, and praised the 7.5 million Euro investment. 36,300 modules will be installed in the weeks ahead. It will generate an annual amount of 2.7 million kilowatt-hours. The facility will produce a peak amount of 2722 kilowatts.

Wow! With that kind of performance, you’d think the facility would be well-maintained so that it could continue to generate cash – and so save the planet. Letting such investments go to hell is usually the last thing one does with a money making machine like that. The Leipziger Volkszeitung article writes:


“The solar park saves the environment an emission of 34,500 tons of CO2 and one expects it will be in operation 20 years.”

20 years? As the date of the article shows, the park was set up in December, 2009 – much less than two years ago. Now it is already overgrown with weeds and on the verge of being useless. Your subsidies at work, folks. The green economy - Germany’s job engine!

Shortchanged: House GOP proposes mere 18% cut in EPA budget
Posted on July 6, 2011 by Steve Milloy
It’s really shocking that the Tea Party-flavored, REPUBLICAN-controlled House is apparently OK with 82% of what the EPA does.  Below is the House Appropriations Committee’s summary of its proposed EPA FY 2012 appropriations bill:

Environmental Protection Agency (EPA) – The EPA has been funded at unparalleled high levels over the past several years, leading to wasteful and unnecessary spending within the agency, as well as contributing to the agency’s regulatory over-reach, which has a detrimental effect on American businesses and the recovering economy.

The EPA is funded at $7.1 billion in the legislation, which is $1.5 billion – or 18% – below last year’s level, and $1.8 billion – or 20% – below the President’s request. In total, this funding level is below the fiscal year 2006 level by $468 million. The bill also caps EPA’s personnel at the 2010 level (the lowest since 1992), and rescinds certain unobligated grant and contract funding. Some of the other EPA cuts include:

If Republicans can’t get a grip on the EPA now — amid the worst economic conditions in three generations — what will it take? If this is the GOP’s starting position for negotiations, what will the compromise be? Shudder…

“We are told…that our own representatives Congress will not exercise their powers oppressively; that we shall not enslave ourselves… Who has enslaved France, Spain, Germany, Turkey, and the other countries that groan under tyranny? They have been enslaved by the hands of their own people. If it be so in America, it will be only as it has been every where else.” - Patrick Henry

Finally.... I thought some of you might enjoy this, and I am sure that some may not, however I wish to introduce you to TexasFred.

Cowboy rules for Texas and the rest of the Wild West
Posted on July 5, 2011 by TexasFred

TexasFred has a way with words and a thought or two that he doesn't mind sharing. He describes himself as;


“ a highly opinionated and very Conservative blogger. If you ask for my opinion, I'll let you know exactly what's on my mind. I don't play the PC game, be very careful what you ask for, you might get more than you expect.”

TexasFred isn't boring! RK
Posted by Rich Kozlovich at 4:44 AM