3 Billion and Counting and Me!

This first appeared in the fall 2010 issue of the Ohio Pest Management Association's quarterly newsletter, The Standard.

Rachel Louise Carson (May 27, 1907 – April 14, 1964) lived her early years in Springdale, Pennsylvania, near Pittsburgh, and graduated from the Pittsburgh Pennsylvania College for Women (Chatham College) in 1929, later earning a master’s degree in zoology from John Hopkins University. She is the author of “Silent Spring” (her 4th book), published in 1962 and considered by some to be one of the most damaging books of the 20th century.

Her claims in this book about decreases in mammal and avian wildlife as a result of DDT were simply wrong. One of the many claims by Carson was that robins were in danger of extinction as a result of continued use of DDT. The truth was that there were more robins in the DDT era than before. And according to Audubon bird charts, there many have been as many as 47 times more. World renowned Ornithologist Roger Tory Peterson stated that the robin was the most abundant bird in North America around the same time that “Silent Spring” came out.

None of the predictions regarding cancer made by Carson ever came true. She herself died of breast cancer on April 14, 1964, at the age of 56, two years after her book came out. She did not live long enough to see real scientists using real science to shred her claims. Unfortunately, this gave impetus to her unscientific statements.

Considered the mother of the modern environmental movement, her radical naturalism became the standard for the movement. She taught that the environment had done all of the shaping and directing on the Earth and it was an act of arrogance for man to attempt to control nature. She is still lauded in various encyclopedias as a thorough, meticulous, highly qualified scientist. Those that have attacked her are presented as self-serving, large chemical companies.

Although the chemical companies did attack her (rightly so), there were also sincere, dedicated scientists such as Dr. J. Gordon Edwards, who had no ax to grind, philosophically or financially, and was just as concerned as Carson about large corporations and their designs on nature. Dr. Edwards was initially thrilled when her book first appeared. As he read “Silent Spring,” his enthusiasm waned when he realized that there was information in the book that simply wasn’t true. He noted “she was playing fast and loose with the facts.” Dr. Edwards, who considered himself to be an environmentalist, believed that “environmentalism didn’t need fraud to justify itself.”

Over the years, research on Carson’s work has shown this to be so. In spite of all the evidence showing that her work should not have been taken seriously, Carson was posthumously awarded the Presidential Medal of Freedom in 1980.


• Carson advocated and promoted ideas that simply are not true.
• She claimed that DDT was a serious carcinogenic agent that with continued use would eventually impact almost 100 percent of the population.
• She claimed that DDT was causing egg shell thinning and as a result the bird population was decreasing.
• She played fast and loose with the facts and made inappropriate citations.

I was born in 1946, and like Carson, I grew up in southwest Pennsylvania. I can understand Carson’s fears for the environment. The effects on the local environment from pollution emanating from coal mines, steel mills and coke ovens in those days would make anyone concerned. Believe me when I tell you that you haven’t seen water pollution until you see a sulfur creek, or air pollution until you have see an old time coke oven. Having seen and experienced all of this, however, is still no excuse for dishonesty.

Approximately five years ago I became aware of a web site, www.3BillionAndCounting.com, created by Dr. D. Rutledge Taylor, who was making a feature documentary film (this film was shot in the purest and most respected form of artistic film making called vérité style, meaning no script and with interaction between the filmmaker and subject). The film debunks the lies about DDT, and makes clear once and for all the devastation the America’s ban on DDT caused worldwide. After posting comments on Doc’s web site for a while, he sent me a personal e-mail asking; who are you? We have communicated and shared information ever since. As a result, I was invited to the world premiere of his documentary movie, “3 Billion and Counting,” in New York City on September 17th, and I was pleased to find that I was listed separately in the credits as the Pest Control Consultant. I also finally got to meet the Doc and his producer Helene Udy, who lost a lifelong friend because of her stand regarding this film and its message. 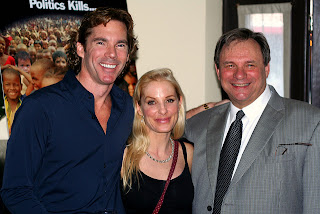 The research that went into this film was a massive undertaking. Oftentimes we will read that there were over 9,000 pages of testimony in the DDT hearing presided over by Judge Sweeney. The Doc managed to find the original documents that have been stored all of these years at the National Archives. He knows they were the originals because he cut the wrappings himself – they had never been opened. He will be posting many of these 9,000 pages online along with all of the comments made by Judge Sweeney. . . and I believe that there were 90 pages in that ruling. That testimony makes it very clear that the ban on DDT was not a scientific decision, but a political decision made by the first director of the Environmental Protection Agency, William Ruckelshaus, which he later admitted.

The “stars” in the film included: Doctors Elizabeth Whelan and Gill Ross of the American Council on Science and Health; Dr. Paul Driessen, author of, “Eco-Imperialism, Green Power, Black Death;” Richard Tren, a Director of Africa Fighting Malaria and co-author of, “The Excellent Powder: DDT’s Political and Scientific History;” Dr. Dennis Avery of the Hudson Institute; Roy Innes and a number of his associates from C.O.R.E. (some of whom have suffered from malaria themselves and lost family members to malaria). All participants outline the real story about the devastation caused by the unscientific ban on DDT. 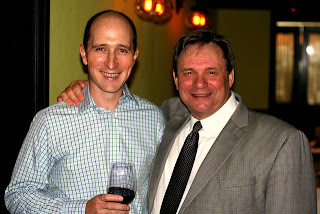 Richard Tren and Me

Dr. Rutledge Taylor dedicated this film to Dr. Edwards, who single-handedly kept hope alive for millions in the third world by having the courage to be the lone voice in the wilderness in favor of keeping DDT, and that it might not fall prey to the POPS treaty.

Dr. Edwards suffered personal attacks for years because of his unbending stand on DDT, lecturing on this subject for the rest of his life, helping prove that all the claims about DDT were lies. Without his efforts, the fate of so many innocent women and children would have been sealed. Dr. Rutledge Taylor states, “It is why I dedicated this film to him/his tireless efforts. . . He simply could/would not stop, as his wife says in the end of the film, "you just don’t give up on something you KNOW is right.” I have much gratitude for this man. To me, HE should get the Nobel Peace Prize.”

What I find ironic is that Dr. Edwards, who can be credited with saving an untold number of lives because of his stand on DDT, is mostly unknown. Yet Rachel Carson is lauded, praised, and even has schools named after her, in spite of the fact that hundreds of millions have suffered or died as a result of her book.

Dr. Edwards was among that group of scientists who drank DDT every day for a year to prove that there would be no detrimental effects. He finally died at the age of 84 from a heart attack while climbing his favorite mountain in Glacier National Park.

In this feature documentary film, Dr. Rutledge Taylor addresses all the claims, from cancer to bird shell thinning and more. Please see it when you get the chance. This is a film that should be seen by every regulator and legislator, along with their staffs. Her pseudo-science ideologies are still taught in high schools this very day! My hope is that this film will rectify that.

Email ThisBlogThis!Share to TwitterShare to FacebookShare to Pinterest
Labels: 3Billion and Counting, DDT, My Commentary