As a rule, I don’t get too worked up about this or that president’s policies on this or that country. It is a big world. As a massive, domestically-focused economy with immense strategic depth and insulation, the United States has enormous wiggle room to both make mistakes and take the long view. Even presidents as aggressive as FDR during times as tumultuous as World War II can afford to sit back and watch things unfold. The bar for what actually impacts the homeland is pretty high.

The reason is movement. Moving things by water is less than one-tenth the cost of moving them by land, making rivers among the most strategic economic assets on the planet. The interconnected rivers of the Greater Mississippi system have more miles of navigable waterway than the rest of the world’s internal waterways combined. That is the core reason the United States is a superpower.

But rivers have one mission-critical downside: they have to end somewhere. If a foe can threaten the river’s mouth, then trade possibilities face a pretty brutal cap. Securing river mouths and keeping them free of foes was a leading topic of much of Europe’s genocidal centuries.

For the Americans, the problematic bit isn’t just New Orleans, the last stop on the Mississippi’s course to the Gulf of Mexico, but also the island of Cuba which truncates access between the Gulf of Mexico and the wider Atlantic. And even if the Americans can get past Cuba, they still need to neutralize all maritime choke points in the Greater Caribbean region.

If anything, it is more serious than it sounds. For the United States has more waterways than “merely” the Mississippi. The Intracoastal Waterway lies behind a series of barrier islands that broadly parallel the East and Gulf Coasts. One of those Cuban-pinch points is the Florida Strait, which could enable a hostile Cuba-based power to not just block American trade in and out of the Gulf of Mexico and Mississippi, but also disrupt internal maritime transport from New York, Richmond, Savannah and Miami from reaching New Orleans, St Louis, Louisville and Minneapolis.

Any extra-hemispheric power that is able to partner with any spot in the region could turn the Americans from an outward-projecting superpower to one whose own internal transport systems are in question. 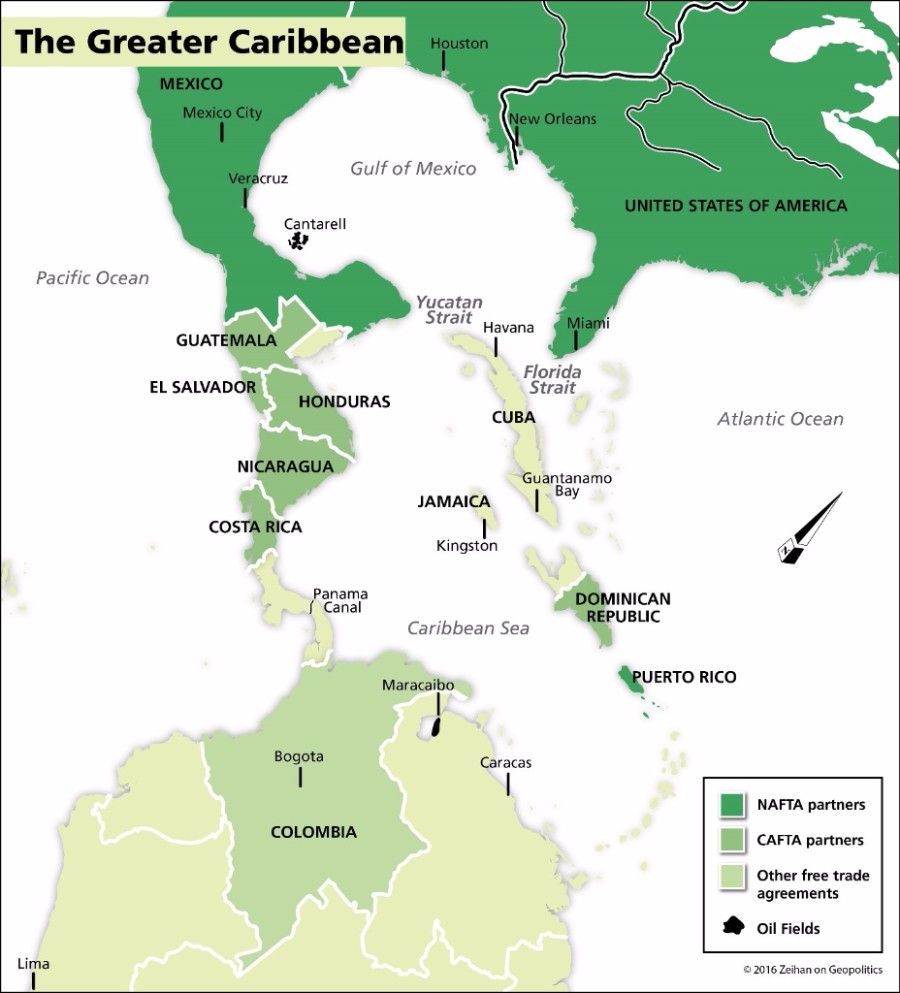 There’s more to the Caribbean than Cuba, more to Panama than cheap shipping, more to Venezuela than cheap oil, more to the Bahamas than beaches, and more to Grenada than cheap medical school. These places and more are the collective garage door to the United States. A hostile Caribbean threatens the United States in a way that a robust China, a war-drum-beating Soviet Union or German-dominated Europe cannot. As such, American strategic policy since roughly 1800 has been borderline neurotic about forcing the Caribbean into a shape that works for the United States. Just how neurotic? What was truly scary about the Cuban Missile Crisis wasn’t just how discombobulated the Americans were, but how logical it was for them to risk nuclear war to keep the Soviets out of Cuba.

At its core, Obama’s sunshine policy was about putting the Cuban bit of the Caribbean puzzle on the path to bed – permanently. It wasn’t like Cuba had been a threat to the Americans since 1992. Left with just its own resources, Cuba is merely an irritant. Yet as a geopolitical strategist I did find it nice to shift the country firmly out of the “watch closely” category with Iran and Ukraine on my wall map, and lump it in with the “meh” column that serves as home to Belgium, Belarus and Bangladesh.

Does this mean Trump’s decision is foolhardy? Not at all. Trump is at least partially right: the Obama administration really didn’t play hardball with Havana – the bilateral warming put next to no pressure on the Castro regime to liberalize, much less stand down. To use the president’s terms, a better deal can certainly be had. Trump holds most of the cards here, and there are plenty of options: everything ranging from a firmer diplomatic stance to economic sanctions that target other investors in Cuba to the threat (or use) of (para)military force. And since at present there is no extra-hemispheric power that seems interested in making Cuba its local military footprint, there is no time pressure either.

But that doesn’t mean that Cuba will remain in its post-Soviet no-man’s-land forever. Trump’s actions must have follow up. For if all this backtrack does is buy time and space for someone else to insert themselves into Cuban affairs, then much of what gives the Americans all that strategic insulation, economic power and room to maneuver – much of what makes the United States a global superpower –could be in doubt.


BOOK PETER FOR YOUR NEXT EVENT

Posted by Rich Kozlovich at 4:12 AM