They're Shocked - Shocked I Tell You! 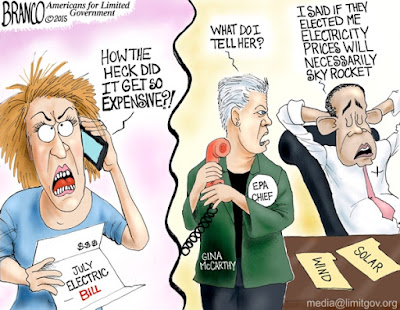 Here is a man who never had a real job, was raised by communists, went to a church filled with black radicals and told the world he wanted to spread the nation’s wealth around. He said he would put coal fired power plants out of business and he's doing that! He said he wanted to fundamentally change the way this country works, and he's doing that with taxes, regulations, immigration policies and international treaties, all of which are being done extra-constitutionally. And now people are shocked - shocked I tell you - and angry there’s costs involved when his vision for the world becomes policy. Why? Everything he declared he was going to do he's doing. It isn't as if no one knew he was a socialist!

What did they think was going to happen? Did they think he was just kidding? Socialists have no sense of humor, unless it's to smugly laugh derisively at those hicks with their Bibles and guns.

Oh, one more thing. The price of energy is only the beginning of the disasters the world will face because of this man's "vision", and that of his myrmidons. What the world faces right now economically and politically is a direct result of the second dumbest man ever to be President of the United States - Jimmy Carter. He's directly responsible for the current disaster in the Middle East and his passage of the Community Reinvestment Act created the housing bubble that took the world's economy with it when it collapsed.  The difference is now more people can clearly see what others have been predicting for decades. The real question now is - will it matter and is it too late?

Are we to take our clue from Captain Renault, who proclaimed he was “shocked - shocked to know there was gambling going on” at Rick's American Café - just before the waiter gave him his winnings! I've a friend who says Casablanca – a movie filled with people with serious issues involving corruption, self-delusion, selfishness, self promotion, greed, weak moral character and a serious lack of clarity - has all the answers and all the questions!

Personally I think Rick is an intellectual and emotional midget, Ilsa is pathetic, Victor is a wimp, and don't let the ending fool you. They're basket cases! But tell me - what’s different now?

You have heard of Casablanca haven’t you?  If not, you need to see it.  Maybe it really has all the answers and all the questions because it’s such a profound reflection of reality.

Posted by Rich Kozlovich at 2:56 PM