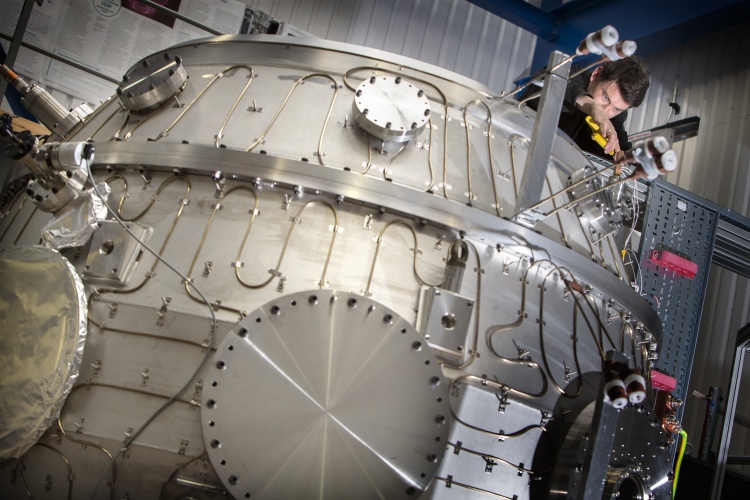 Oxfordshire-based Tokamak Energy has fired up its latest fusion reactor for the first time and aims to reach temperatures of 100m degrees Celsius next year. Known as the ST40, the reactor represents the third of five stages in the company’s plan to deliver fusion energy to the grid by 2030. Controlled fusion requires temperatures in excess of 100m°C, but this has never been achieved by a privately funded company. To reach that goal, Tokamak Energy is focusing on compact, spherical tokamak reactors, as it believes they are quicker to develop and offer the quickest route to commercial fusion power. -- The Engineer, 28 April 2017

Britain’s newest fusion reactor has been fired up and taken the UK one step further towards generating electricity from the power of the stars. The heart of the Tokamak ST40 reactor – a super-hot cloud of electrically charged gas, or plasma – is expected to reach a temperature of 100 million centigrade in 2018. The new reactor was built at Milton Park, Oxfordshire, by Tokamak Energy, a private company pioneering fusion power in the UK. Speaking after the ST40 reactor was officially turned on and achieved “first plasma”, Tokamak Energy chief executive Dr David Kingham said: “Today is an important day for fusion energy development in the UK, and the world. We are unveiling the first world-class controlled fusion device to have been designed, built and operated by a private venture. The ST40 is a machine that will show fusion temperatures – 100 million degrees – are possible in compact, cost-effective reactors. This will allow fusion power to be achieved in years, not decades.” --Energy Voice, 28 April 2017

Our obsession with cutting carbon emissions has had terrible consequences. Our attempts to be altruistic have harmed rather than helped the most vulnerable. Almost as bad, those 11 million people who now own a diesel car are about to be penalised for following government advice a decade ago that the vehicles would help the country cut CO2 emissions. It is car manufacturers who are still making the most money out of this great green swindle — consumers certainly aren’t. Downing Street policy advisers hint that Theresa May is on the side of the consumer, and sceptical of the latest money-spinning environmental fad. Last year, the prime minister’s joint chief of staff Nick Timothy described the Climate Change Act, which has been at the root of many of these misguided policies, as “a monstrous act of national self-harm”. He was right. As soon as the election is over Britain needs a coordinated energy strategy and a new Clean Air Act, to protect the environment and restore faith in government policy. --Alice Thomson, The Times, 26 April 2017

Drought in the U.S. fell to a record low this week, with just 6.1% of the lower 48 states currently experiencing such dry conditions, federal officials announced Thursday. That’s the lowest percentage in the 17-year history of the weekly U.S. Drought Monitor report. The previous record low occurred in July 2010, when 7.7% of the contiguous U.S. was in a drought. “Drought has certainly been disappearing at a rapid rate this spring,” said meteorologist Brad Rippey of the U.S. Department of Agriculture. The five-year drought in California is practically over, with only about 8% of the state currently in drought. --Doyle Rice, USA Today, 27 April 2017

One of the many damaging effects of climate change put forward by scientists is that shrinking habitats are causing polar and grizzly bears to mate more. This hybridisation could dilute polar bears’ DNA which will further drive down the animals’ already dwindling numbers, experts suggest. But a new study reveals that this inter-breeding is natural and is in fact not a consequence of global warming. --Harry Pettit, Daily Mail, 20 April 2017

As President Trump’s top advisers prepare to hash out a final policy on the Paris climate agreement dumped onto their laps by President Obama, another option has hit the table: Declare the deal a treaty and send it to the Senate to be killed. The treaty option could emerge as the middle ground in the increasingly tense battle between “remainers” on the one hand, who say the president should abide by Mr. Obama’s global warming deal, and the Paris agreement’s detractors, who say Mr. Trump would be breaking a key campaign promise if he doesn’t withdraw from the pact. Mr. Trump could toss out Mr. Obama’s decision that the Paris accord was an executive agreement, declare it a treaty and send it to the Senate, where it would need a two-thirds vote for ratification. --Stephen Dinan, Washington Times, 27 April 2017

Fresh off the news this week that Gazprom’s Nord Stream 2 pipeline secured 50 percent of its funding through loans from five European companies, the CEO of the Russian state-owned natural gas firm was positively glowing. “Today, in 2017, we are beating our 2016 record highs by around 10 percent. So we can expect new records this year and Gazprom’s European market share is poised to rise,” Alexei Miller said in an interview with Reuters. Miller has a point here. However much Europe has agitated for diversifying away from Russian natural gas supplies, the continent has in fact increased its reliance on Gazprom since the annexation of Crimea. Gazprom holds the trump card in this relationship, as it has shown both the capability and the willingness to shut off supplies mid-winter in order to express its displeasure with its customers. -- The American Interest, 27 April 2017
Posted by Rich Kozlovich at 2:44 AM