Each and every act of Muslim terrorism is followed by a wave of denial.  The politicians who have done the most to cause the latest disaster are the eagerest to blame it on something, anything else. 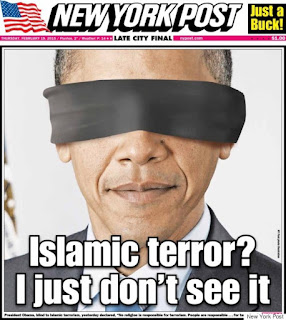 The San Bernardino Muslim massacre was blamed on postpartum depression at CNN. Bill Nye blamed the latest Paris attacks on Global Warming. According to Hillary Clinton, Benghazi was a movie review with artillery. Islamic terrorism was blamed by the State Department on a lack of jobs, but Syed Farook had a good government job and his wife was the daughter of a wealthy family.

After rummaging through their big brass chest of excuses, Obama and his media allies have settled on gun control as their latest weapon of mass distraction.

California has the toughest gun laws in the nation. Unlike Ted Kennedy, the terrorists weren’t on the no-fly list that has become the latest desperate meme of mass distraction. And, despite Obama’s claim in Paris that mass shootings don’t happen in other countries because of gun control magic, they most certainly do. European gun control didn’t stop a Muslim mass shooting in Paris that killed 130 people.

Syed Farook and Tasheen Malik had built pipe bombs. The latest attack in the UK involved a knife. So did quite a few in Jerusalem. The Boston Marathon massacre used fireworks and a pressure cooker.

The Muslim mass murder of 3,000 people on 9/11 was carried out with box cutters.

If only we had some way to ban terrorists from buying pressure cookers, knives and box cutters.

Gun control is a distraction. A way to make something other than Islam into the problem that needs solving. If we banned guns, then the problem would be foreign policy. If we spent all our time working to aid Islamist political takeovers, then it would the weather. Obama has tried to aid Islamists and lower sea levels, so he has been reduced to blaming the inanimate objects of the latest terror attack.

Denialists will ignore the allegiances of terrorists like Nidal Hassan and Syed Farook to Jihadists to focus on individual pathologies. If that doesn’t work, they’ll pull back to a planetary focus and blame the weather patterns of the entire planet. They’ll zoom in with great detail on weapons purchases while ignoring the ideology that motivated the attacks. They’ll have a hundred different explanations for each attack that fail to account for the phenomenon of Islamic terrorism as a whole.

These aren’t reasonable arguments. Taken together they form a pattern of conspiracy theories.

The most basic aspect of the conspiracy theory is that it bypasses the obvious reasonable explanation and vanishes down a rabbit hole of complicated alternative explanations that make no real sense but allow the conspiracists to avoid dealing with the implications of the actual event that took place.

Leftists did not want to deal with the fact that JFK had been murdered by one of their own. So they invented a bunch of alternative conspiracies involving the CIA, Cubans and other “right-wing” villains. These conspiracies allowed them to avoid dealing with the violence at the heart of the left. But that violence continued to spill over anyway leading to riots and terror plots. In their alternate reality, none of it was their fault. The “Fall of Camelot” was caused by some “miasma of right-wing hatred” in Dallas.

Their response to 9/11 flirted with conspiracy theories.

Democratic politicians, with some exceptions, usually knew better than to openly air blatant 9/11 conspiracy theories.  But they instead embraced a “soft” left-wing Trutherism that shifted the focus away from Islamic terrorism to alternative explanations that were meant to distract Americans from what really happened by finding sideways angles for blaming the attack on Bush and Republicans.
Bush may not have masterminded it, but Republican foreign policy caused it. Or worsened it.

It’s 2015 and the Terrorism Truthers have been reduced to frantically scrambling for any explanation from postpartum depression to the weather to explain the persistence of Islamic terrorism.

Trutherism works best when the Truthers aren’t in power. Muslim terrorism can’t be blamed on the government when both France and America are run by ridiculously notorious leftists. All that’s left is a “soft” Trutherism that seeks alternative explanations without being able to consistently answer the central question of why these attacks are taking place.

And this lack of a plausible central conspirator is the weak point of leftist Terrorism Denial.

Leftist Truthers like Obama are forced to constantly substitute new “right-wing” villains. Today it’s the NRA. Yesterday it was a Coptic Christian who made a YouTube video. But like the USSR’s efforts to blame its economic failures on a shifting gallery of villains, these explanations are unsatisfying. And they leave even leftists, never mind ordinary Americans, uneasy about a crisis they don’t understand.

There is something of Orwell’s “We have always been at war with Eastasia” to these deceits.

What if we can’t beat them by banning guns, changing the weather, supporting Islamists or any of the other magical answers that completely fall apart at even the most casual examination?

The left’s response to Islamic terrorism has been built around a frantic effort to distract and divert us from exactly that question, blaming anything and everything but Islam, while sharply denouncing anyone who ignores the distractions and addresses that central question.

Attorney General Lynch responded to the San Bernardino terror attack by assuring Islamists that she intended to crack down on criticism of Islam. Criticism of Islam is dangerous, not because it leads to a mythical anti-Muslim backlash that we are constantly warned about as if it were more dangerous than Muslim terrorism itself yet never actually materializes, but because it destroys Terrorist Trutherism.

If Islamic terrorism is the problem, then the left and the Democrats who handed over their party to it are guilty of ignoring, minimizing and lying about a serious problem.

They have to go on lying, ignoring and minimizing, and even threatening to dump the First Amendment along with the Second, because they have long since become complicit in the crimes of their Islamist partner organizations.

Yesterday they blamed the weather. Today they’ll blame guns. Tomorrow, it’ll be something else.

We are always at war with Eastasia, unless it’s Eurasia. We are never however at war with Islam. The issue may be anything so long as it isn’t Muslim terrorism. Those are the words that no Democrat will utter. They will call it “man-caused disasters” or “violent extremism” or “hybrid workplace Jihad”.

It’s time to call this what it is, denialism, trutherism and conspiracism.

It’s time to take away Obama’s weapons of mass distraction and expose his Trutherism for what it is.

Islamic terrorism isn’t caused by a thousand different problems, conditions, conspiracies and excuses. It’s caused by Islam. Every attempt to distract from that is Denialism and Trutherism.

And we owe it to the victims of the latest attack and all the attacks to end the denial and the lies.

Daniel Greenfield is a New York City based writer and blogger and a Shillman Journalism Fellow of the David Horowitz Freedom Center.
Posted by Rich Kozlovich at 7:11 AM