Muslim Immigration is What ISIS Wants

Ordinary terrorists have two goals; to compel the enemy to meet their political demands and to rally their supporters to consolidate their class, race or national identity group behind them. 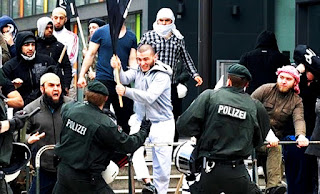 Islamic terrorists are not interested in the “political demands” part. They will occasionally accept concessions and even offer Hudnas, temporary truces, but no permanent separate peace can be achieved with them. It’s why Israel’s peace process with terrorists has gone on failing for decades. It’s why the attempt by Gaddafi to achieve peace with the LIFG ended in a civil war and his death. It’s why Obama’s attempts to negotiate with the “moderate Taliban” failed miserably.

Al Qaeda and ISIS are not “negative” protest movements formed in response to our foreign policy. That’s a foolish self-centered idea held by foolish self-centered Westerners. Al Qaeda and ISIS are “positive” movements that seek to achieve larger religious goals entirely apart from us. Islamic terrorists are not responding to us. They are responding to the Koran and to over a thousand years of history.

Osama bin Laden did not carry out 9/11 to inflict harm on Americans. That was a secondary goal. His primary goal was to rally Muslims to build a Caliphate by encouraging them to attack America.

The ritualistic “Why do they hate us” browbeating favored by the chattering classes is nonsense. Al Qaeda hated us because we were not Muslims. But it was only using us as the hated “other” to consolidate a collective Muslim identity. We are to Islamists what the Jews were to Hitler; a useful scapegoat whose otherness can be used to manufacture a contrasting pure Aryan or Islamic identity.

No dialogue is possible with an ideology whose virtue is premised on seeing you as utterly evil.

You can negotiate with terrorists, though you shouldn’t. But Islamic terrorists rarely even bother to negotiate. Their core focus is on rallying local Muslims and the Ummah behind them. They don’t recognize national borders so any hope for a permanent peace behind recognized borders is wishful thinking. Islam is a transnational movement. Islamic terrorism is a race between terror groups around the world to carve out their own Islamic states and then use them as a springboard to a Caliphate.

ISIS is the end stage of Islamic terrorism. Its leader is a Caliph with all Muslims obliged to submit to him. The Islamic State is not just in Syria and Iraq. It is everywhere that a Muslim outpost swears allegiance to the Caliph. On its own maps the Islamic State encompasses parts of Egypt, Libya, Algeria, Nigeria, Saudi Arabia and Russia. The more local Islamic terror groups pledge allegiance to ISIS, the bigger it becomes.

ISIS doesn’t plan to defeat America through acts of terrorism. The plan for defeating America, like every other country, Muslim or non-Muslim, is to build a domestic Muslim terror movement that will be able to hold territory and swear allegiance to the Islamic State.

The idea of an American Emirate may seem silly but consider Molenbeek, the neighborhood in Brussels known as the Jihadi capital of Europe, deemed a no-go zone by local authorities, right in the capital of the European Union. You can take a taxi from NATO HQ to a Muslim micro-state linked to most of the major recent Islamic terror attacks in Europe including the latest ISIS attack in Paris.

Molenbeek provides ISIS recruits for its war and a gateway for ISIS attacks in Europe. The media is filled with articles about what ISIS wants, but there is no question that Molenbeek is what ISIS wants.

And it’s only Muslim immigration to Europe that makes an ISIS base like Molenbeek possible.

ISIS has short term and long term needs. In the short term, ISIS needs as many recruits as possible. And it is in the West where traditional Muslim ties of kinship and community are so frayed that the transnationalism of heading out to fight for a Caliphate in someone else’s country is most deeply appealing. ISIS aggressively seeks to recruit Muslims in the West because they have the skills, money and naiveté to be useful to the Islamic State. But in the long term, ISIS needs more Muslim immigration to the West to create a steady supply of recruits, collaborators and eventually Western emirates.

If ISIS is serious about making a bid for Italy, it needs a large Muslim population on the ground. It doesn’t even matter if this population comes from refugees fleeing ISIS. The children of these refugees will still be Sunni Muslims in a foreign land where Algerian, Somali, Syrian and Pakistani Muslims discover that they have more in common than they do with the natives. It is this accidental Western multiculturalism that erases tribal Muslim rivalries and makes the ambition of a single Muslim Caliphate appear plausible.

ISIS does not plan to defeat America with terror plots. But those plots will eventually accumulate into an organized domestic terror organization. An Islamic State in America based around a majority Muslim town or neighborhood with its own leader pledging allegiance to the Caliph of the Islamic State.

An American Molenbeek; and there are already plenty of candidates for that horrifying honor.

Any Muslim plans for expanding into the West depend on Muslim immigration. Whether it’s ISIS or its Muslim Brotherhood ancestor, or any of the other Islamist organizations and networks, they all require manpower. Some of that manpower will be provided by high Muslim birth rates, but it won’t be nearly enough, not for a country the size of America, without a large annual flow of Muslim migrants.

We are told that halting Muslim immigration would only encourage Muslim terrorism. But our open door to Muslim immigration certainly hasn’t stopped terrorism. Instead it has increased it by providing reinforcements to the terrorists. If we can’t stop Muslim terrorism with the population we have now, how are we going to manage it if the Islamic population continues doubling and even tripling?

Even if we defeat ISIS tomorrow, Al Qaeda and other Islamist groups descended from the Muslim Brotherhood will continue pursuing the same goals. And they will rely on the Muslim population in the United States to provide them with money, supplies, cover and an infrastructure for terrorism.

ISIS can’t defeat us with terror attacks. The only hope for an enduring Islamic victory over America is through the rise of domestic groups that pledge allegiance to the Caliphate. ISIS can’t invade America. It has to be invited in. That’s what our immigration policy does.

Trump isn’t a threat to national security. Muslim immigration is.

Islamic terrorists can’t defeat us no matter how many planes they fly into buildings. But they can and will defeat us if they continue landing planes at JFK and disembarking thousands and tens of thousands of settlers who will serve as a base population for their war against America.

Muslim immigration is the Islamic State’s only hope for victory over America
Posted by Rich Kozlovich at 8:17 AM