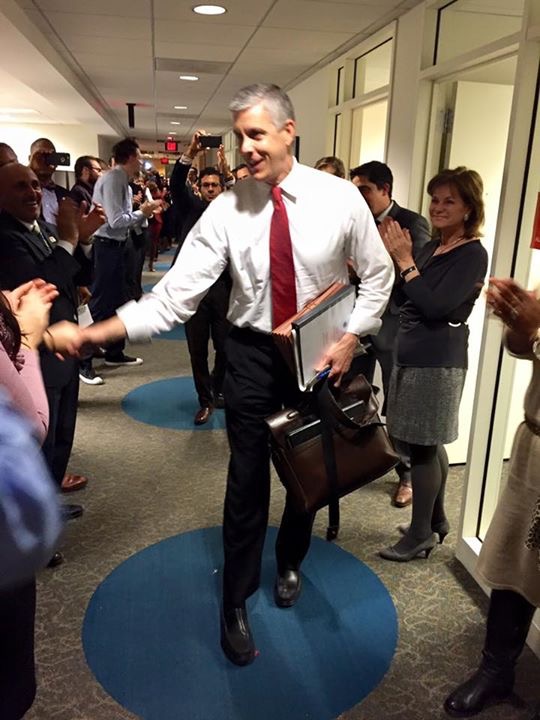 Mission Almost Accomplished, Arne DuncanPosted on Dec. 18, 2015, by Mary Grabar: The "Every Child Succeeds Act," signed into law on December 10, gave all the usual suspects in big government, teachers unions, multinational textbook companies, social justice warriors, and busybody non-profits wanting a piece of the universal preschool funding pie cause for celebration. Today, the Department of Education sent out a notice about taking "First Steps in Transition to New Law." The "Dear Colleague" letter embedded there is enough to chill the heart of anyone but the most dedicated bureaucrat.  But if you dare, there is an invitation at the end of the announcement atbout two hearings in January on the ESSA law.

Outgoing Education Secretary Arne Duncan, expressed his pleasure at getting ESSA passed, but told POLITICO that his biggest regret was the lack of political action on gun violence (citing Sandy Hook). He promised that gun control would be something that he would "work on" in his as yet undisclosed future work.

In its passage, ESSA had all the transparency of the Affordable Care Act and Common Core, as I described in my article at the Selous Foundation for Public Policy Research, "Common Core by a New Name, and On Steroids." At the Federalist John Holland offers a great analysis of how many Republicans squandered their power on this.  And Mercedes Schneider does a wonderful job of exposing the backroom shenanigans in her book Common Core Dilemma, which I reviewed. She, however, asked that I print a clarification of one of her points, which I do here:


My issue with the Coleman report language is that it presumes that preparing students of color to function in white society will automatically lead to opportunities for social mobility in that same, white-dominated society.  My point is that preparing students of color academically
for mainstream society is not enough if society has controls (both overt and covert) in place to oppress those students, including the harmful perception that being educated is somehow a betrayal of loyalty to one's own ethnic group. Thus, my concern centers on an opportunity gap, not an achievement gap.

Dr. Schneider is a top-notch researcher, and by all accounts a wonderful teacher.  She points out the dangers of corporate control.

But I see that corporate control being fueled by the growth of government.  The mega data-mining and curriculum corporations have the access to government centers of power that small companies and citizens do not. This includes a National Education Week event that brings together "Entrepreneurs, Investors, Educators, Opinion and Policy Makers." It was held at New York University this week and was supported by the New York public television station. It was presented by education technology startup company, EDGE: "We build companies that are transforming education."  The Dissident Prof is sorry she had to miss it, especially the presentations by a dean at NYU, the chancellor of New York City schools, and executives from McGraw Hill and Pearson.  I also wonder what it takes to be a "media participant."  Perhaps I should ask this year's media participants, Scholastic, Chronicle of Higher Education, Inside Higher Ed, and NPR.

There is always next year! (Tax-deductible contributions for the Dissident Prof travel fund are most welcome!)  I will try to get the early bird price; this year it was $705.

Lest the little people feel that they are being left out of education decisions, we have "parental engagement." It was written into President Johnson's Education Act in 1965 to assure all that in spite of all the new federal regulations, parents would have a say-so in the education their children received.  I observed in Georgia last year how that works!

But you can get involved!  The Obama administration is extending its deadline on a Draft Statement on Family Engagement. But hurry!  The deadline is December 21.  Don't let Christmas shopping distract you. Go here to see how to comment. 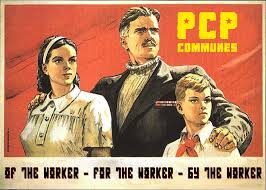 Family EngagementSome suggestions so far of the draft follow below:
Round-the-Clock Availability: Suggestions that facility space should be available at different times of the day and on weekends for gatherings of specific groups, such as fathers or young parents.

Parent Training: "Parent Training Information Centers and familty-to-family health information centers."
Professionals: "Professionals should encourage families to engage with their children in their home language through enriching activities that draw on their culture and traditions" (page 12).

Home Visits: "To support ongoing relationship building with families, programs and schools should conduct periodic home visits so that teachers and families can get to know each other and communicate about children's goals, strengths, challenges, and progress" (page 13).
Mental Health Consultants: For family support.

Data Tracking: Page 14: "Tracking Family Engagement Data" ("the effects of family engagement activities on children's development, learning and wellness," "a valid and reliable assessment of the teacher/provider-family relationships reported by teacher/providers, families, and leaders.")
Read it and weep. You should read it for yourself.

So far, a number of non-profits, from the traditionally meddling bureaucratic to the radical, have written, naturally offering advice to the feds, as well as tips on how they can "help."
One parent of a ten-year-old in Florida public schools wrote in.  Michelle Meeks prefaced her responses to the questionnaire by informing the feds that she is an independent politically and that she pays property and income taxes." (They do need to be reminded.):


I also went to public school as a child in the same school district my daughter now attends. Times have changed, and not for the better. All the parents are treated like they are being disobedient and need to fall in line. Even parents who are eager to help are treated badly.

She replied to the first question, What are the key messages that we should communicate in a federal policy statement on family engagement? with


Family engagement in the current definition in our government = bossing, dictating, meddling, overstepping and intruding into the family home life of the tax payers/parents and students. . . .There should be NO FEDRAL POLICY regarding locally controlled schools.

As I saw at the parental engagment conference, though, most parents who are "engaged" don't question the program.

We can expect more of such "engagement," as well as more "community schools." The Coalition for Community Schools loves the ESSA.  "Community schools" are part of Arne Duncan's "vision" as he described it in 2010:


My vision is that schools need to be community centers. Schools need to be open 12, 13, 14 hours a day six, seven days a week, 12 months out of the year, with a whole host of activities, particularly in disadvantaged communities.

That vision includes medical care, optometry, and social workers and counselors "to work through the challenges [students are] facing at home."

No doubt, parents will certainly be engaged at community schools!
Posted by Rich Kozlovich at 4:08 AM