Finally! We Can Thank The French For Something!

Anthropogenic Climate Change is not about the Environment.  It's about control and a massive transfer of money from America to the rest of the world. 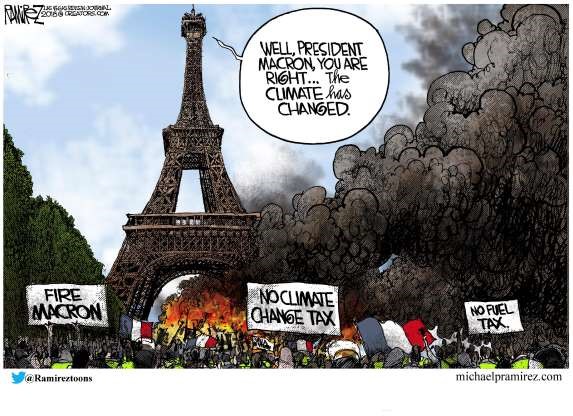 After Lafayette, we've never gotten on all that well with the French.  They've been a pain in the butt for all of the 20th century, and nothing has changed in the 21st century. And De Gaulle was amongst the biggest pains in the butt of them all.  The French just think they know best, but like all leftists - so much of what they "know" just ain't so.  And the most brilliant leader they ever had was Napoleon, and he was Italian.  What's most irritating about the French, and much of the rest of Europe, is they're arrogant in their ignorance.

With the French it's a matter of having made up their minds and demanding no one dare show them any facts that don't support their world view.  But, what else can one expect from leftists.  That's the one common denominator about leftists worldwide. However, we can now stop, pause and reflect on the favor the French are doing for the world.  Burning down Paris!

First of all, one of the things that should be apparent to the most casual observer is that polls about what people believe and support are so often a load of horsepucky.

All this feel good stuff about Global Warming is coming to a head.  This Global Warming fraud has created a carbon tax scam and generated massive costs which didn't bother anyone until they actually had to feel the burden of those costs in their paychecks.  Up until now it's been all "warm and fuzzy feel good" environmental politics.  But now it's about money - their money - and they're really mad.

This has been are really big shock to all these echo chamber head nodders among Europe's leaders. When this all started Macron actually flew off to a meeting in Argentina thinking it was no big deal. He was wrong!

All the rest of the countries who've signed on to these global warming initiatives don’t care one whit about following these agreements.  China, Russia and all the third world countries will go the way they've always gone, ignoring anything that will lower their economic growth.

All the other costs - which has run into the hundreds of billions of dollars - and all the costs they want to impose - which would run into the trillions of dollars would destroy the industrialized world's economies  - have been hidden by being borrowed money or hasn't been implemented yet. Money these lunatic leftist leaders don't have and will never have in the future.  Debt they've burdened their citizens with, and debt they're incapable of paying back.   Now does anyone get why they're so upset about Trump's tariffs?  They won't be able to maintain the fraud of their national economies.

These tariffs aren't about the American economy, they're about the rest of the world's economy, and without the United States the world doesn't have an economy.  It not economics, it's political strategy, and the United States controls the game because the U.S. is the only nation that has its own internal market, can feed itself, fuel itself, arm itself and defend itself without help from any other nation on Earth.

Any downturn in the rest of the world's economies is a disaster.....to them......and they know it!

These "gas tax" riots will force everyone in Europe to take a serious look at this massive global scam that's been pushed on the world by junk scientists, misanthropic activist misfits and globalist politicians.

This isn't about the environment or saving the planet.  It's about control.  In year 2000 the French President was Jacques Chirac, and he stated the Kyoto Accords was the first step in global governance. That was always the real goal and they knew it from the beginning.

That and that alone is the true driving force behind all of this because they believe this Anthropogenic Climate Change fraud is the tool they need to impose what they really want, some form of Global Governance, socialist Global Governance, with them having a major say in how the world is run, and forcing America to pay for it.

These Globalist European socialist leaders believe this is the only way they can save Europe from becoming a third rate continent dependent on ......well...... everyone.  Except there's a problem with that thinking. They already are dependent of everyone, they're broke, their demographic pyramid is a mess, immigration is destroying ethnic Europe and European culture, and for all their mouthiness, they absolutely need the United States as a partner.  A partner in trade and defense or they're going down the tubes.

Europe isn't a natural capital generator.  It could be, but they're cultural paradigm is socialist in nature.  It's a top down ruling power structure going back to being ruled by Kings. And as in all socialist endeavors, they're running out of other people's money.

Their geography isn't conducive to low military budgets either.  The United States has really been the guarantor of European security, which hasn't been appreciated as it should be.  The Bretton Woods economic and defense concepts we've been operating under are coming to an end, and it's long overdue.

Allegedly, France and Germany want to create an all European Army, but they don't have the money, or any sense of agreement as to whose to run it, who's to pay for it, or how it's to be paid for. Clearly more taxes aren't going to work in France, and I doubt it will work anywhere else in Europe, so it's not going to happen.  I have a suggestion for France and Germany.  We'll abandon NATO, and let them have it.  The structure is already in place but the United States will be absent, physically and monetarily.  Let them pay for it.  Let them man it.  Let them either survive or collapse on their own.

This will be a great opportunity for Europe to show the U.S. they just don't need us and how smart and capable they are.  Any bets on how successful that will be?

But for now, we need to thank these French rioters, because they're going to force Europe to finally start thinking, and it's my guess it won't be long before these internationalist socialist leaders will find they're going to be kicked out and nationalist socialist leaders will be in charge.  It's been my opinion for some time Europe is heading into an era of unprecedented social upheaval, civil disobedience and unbridled violence. And it won't just be about taxes.

The French are giving Europe, and the world, a massive wake up call.  Thank you France!

Oh, one more thing we can thank the French for. We Feel the Bern?

Posted by Rich Kozlovich at 2:42 AM

Email ThisBlogThis!Share to TwitterShare to FacebookShare to Pinterest
Labels: Cartoon of the Day, France, Globalism, GW, Macron, My Commentary, Taxes