A Question For Bernie Sanders 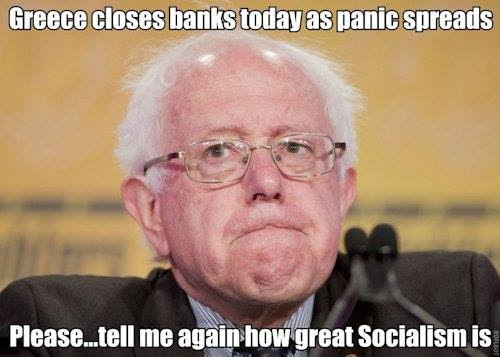 Over the years I've talked about the socialist monsters of the 20th century and how many innocent lives they sacrificed on the altar of this insane secular atheistic religion. We have the history of these terrible crimes against humanity and that history is incontestable.

Alan Charles Kors wrote an article entitled, “The Age of Communism Lives”, on April 9, 2015. He says:

The best scholarship yields numbers that the soul must try to comprehend: scores and scores and scores of millions of individual human bodies, which is what makes the work of Lee Edwards in keeping alive in our minds the victims of communism so morally essential, so morally vital.

Alexander Yakovlev, Gorbachev’s right hand man, who examined the archives for the last Soviet leader and who came away a deeply changed and heroic man, let us know that 60 million were slain in the Soviet Union alone. The Chinese author Jung Chang, who had access to scores of Mao Zedong’s collaborators and to the detailed Russian and local archives, reached the figure of 70 million Chinese lives snuffed out by Mao’s deliberate choices. If we count those dead of starvation from the communist ability and desire to experiment with human interaction in agriculture—20 million to 40 million in three years—we may add scores of millions more.

The communist Khmer Rouge under Pol Pot, who was educated in France and taught his politics by French communist intellectuals, butchered one-fifth to one-fourth of the entire Cambodian population. That would be as if an American regime had murdered some 50 to 70 million of its people. In each and every communist regime, countless people were shot and died by deliberate exposure, starved and murdered in work camps and prisons meant to extract every last fiber of labor before they die. No cause ever in the history of all mankind has produced more slaughtered innocents and more orphans than communism. It was a system of production that surpassed all others in turning out the dead……. There’s much more here.

I find people like Bernie Sanders and the entire left must be insane to continue to tout policies that have ended in absolute disaster.  Policies that demonstrate a total disregard for human suffering, privation, disease, starvation and early death. These are educated people – they must know the history of leftism. They must know the outcome of the very policies they espouse are so flawed they cannot possibly work. Yet they refuse the recant. There can only be one conclusion.  They must all be insane!
Posted by Rich Kozlovich at 7:23 PM